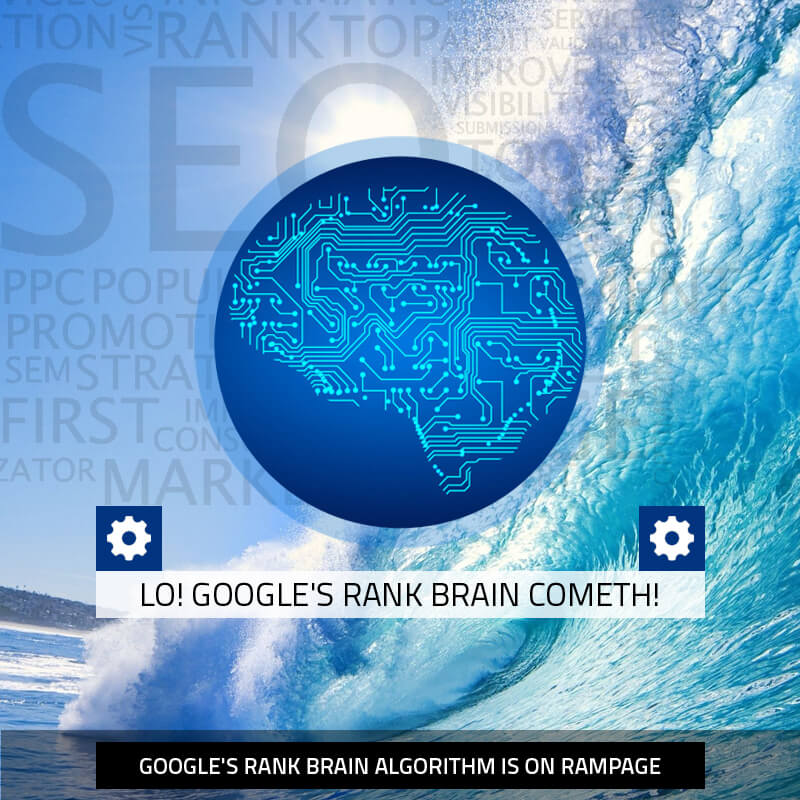 Let the ground shake, the mountains shudder, the oceans churn! Google’s Rank Brain algorithm is on the rampage and it’s got people in the SEO field scrambling to not face its wrath.

What’s Rank Brain? That’s a good question, and we’ll take a look at this intimidating software and see where it comes from, what it reportedly does, and how to make the most of it.

According to Google, this RankBrain is going to help them sort through Google’s search results. Google has a suite of software to handle its search results, some are public and some aren’t. We’ll never know what is going on behind closed doors at Google because proprietary software needs to be developed without interloping.

The breaking news comes from Google that went to the site searchengineland.com, and Bloomberg.

First of all, RankBrain is some sort of artificial intelligence, engineered to facilitate Google’s search technologies. There’s no telling what it really does, so you’ll definitely see the top SEO specialists tearing it apart at any chance. It incorporates something called “Machine Learning”, which basically means the hardware and software are self learning, nothing like those super smart computers and androids you see in science fiction movies, but enough intelligence to have enough analytical power to make rudimentary choices and decisions.

RankBrain isn’t some independent know it all that will dominate the world of Google, but is a helper of sorts using state of the art artificial intelligence models and engineering. It will learn, adapt, and present data in a way that other software can work in concordance with it for greater efficiency and results.

Google has been pushing the envelope the past year with new software and improving existing software. The reason is that they’re looking to give the surfers the best results, the results that are useful which is a betterment of society overall. Google has been beating the heck out of spammers and Black Hat technicians and the results are showing wit happier surfers and people and business that are deserving of recognition, getting that recognition.

Back in 2013, Google revealed the name of it’s primary algorithm. All their other software works with this algorithm. Google’s best known algorithm software include names most in the SEO field are familiar with, Penguin, Panda, Payday, Pigeon, Top Heavy, Pirate, Mobile Friendly. Each of these algorithms has a purpose. When combined, they become the vanguard of Google’s search power. For example, Mobile Friendly gives mobile friendly pages an boost. Mobile is the fastest growing way people access the web. Pigeon is the strongarm of the local SEO, Top Heavy handles ad heavy pages, and Panda Payday, and Penguin fight spam. So all of these combined should give Hummingbird and RankBrain so much power that results should be astonishing to say the least. Add the fact that the RankBrain software is self learning, we’re talking about a new age of search engine technology that should make life on the web far more efficient and pleasurable.
This takes us to the topic of “Signals”. Signals are what Google uses to figure out how to rank your web pages. It scans the pages and uses the words and phrases to put together what it finds will better index your site via topic, niche, location, and more. These signals that each algorithm software by Google uses, is then used by Hummingbird and now by RankBrain. Rank Brain just won’t scan the words but will ‘think’ and then report that data to Hummingbird, making Hummingbird one of the most unique software ever created.

To put signals in perspective, there are reportedly over 200 major ranking signals that Hummingbird and RankBrain will scour and there are tens of thousands of variations on those signals.

There’s much more to what’s going on with RankBrain and Google. How the signals are used, which ones are the most powerful, all these things the public and SEO experts can see and some not. The sheer volume of over 3 billion searches daily calls for software that can do the job and not buckle under the sheer magnitude. RankBrain is going to have to prove itself to the point of total confidence because letting a piece of software have any independence is asking for trouble if you don’t have enough safeguards in place. We’re not talking AI like “Hal” in the classic sci-fi movie “2001: A Space Odyssey”, but something that is still in the experimental stages and there’s no telling what could happen if it goes awry.

We’ll have to wait and see how RankBrain performs, and if it does change the game some, all the better.