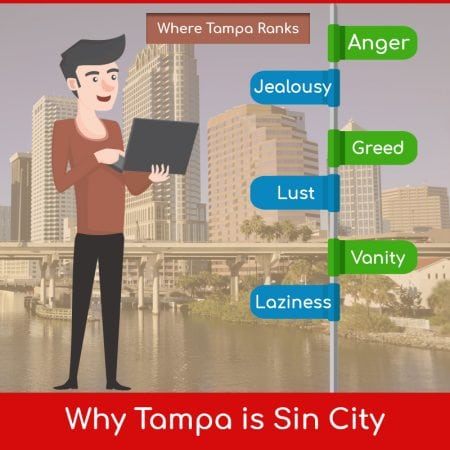 When you think of “sin city” America, you probably pretty much automatically think of Las Vegas. However, this isn’t the only sinful place in the nation. It also isn’t the only place where what happens there, stays there. For instance, Milwaukee is known as a beer-loving city while New Orleans is hedonistic by nature. Look around and you’ll find bad behavior, demons, and a lack of overall innocence.

At some point we must all atone for our sins.

Those with a gambling addiction cost the United States about $6 billion per year in criminal justice and healthcare fees.

Smoking burns a $300 billion hole in Uncle Sam’s wallet every year.
Thankfully there are still some saints among us. This means that not every city is created to be equally as sinful. This is something that WalletHub investigated recently. They created 31 key indicators of “evil deeds” (everything from violent crimes to excessive drinking and the distribution of adult entertainment facilities) then conducted a survey over 180 U.S. cities. In doing so they discovered that Las Vegas, Nevada topped the list. But where does Tampa, Florida rank?

According to WalletHub, this is the country’s 15th most sinful city. The reason for this isn’t what you may think: the number of strip clubs found here. There were other key factors that were considered, including:

WalletHub graded the area on a 100-point scale, with a score of 100 representing the highest level of sinfulness. The overall score for the city was based on a weighted average across all of these metrics. This is the score they used to rank the city. In doing so they gave Tampa a 48.09, which placed the city on top, in 15th place, because of its “vanity.”

According to WalletHub, the area is ranked so highly in “vanity” because of the number of salons – everything from tanning and hair salons to plastic surgeons. The most commonly performed services were breast augmentation, liposuction, rhinoplasty, eyelid surgery and facelifts. This ranked the area 8th in the nation in terms of people having plastic surgery.
The area also ranked high for “lust” because of the number of adult entertainment establishments there coupled with things like its high teen birth rate and the fact that the most active Tinder users also lived there. This brought them in at 11th place for this category. Only Las Vegas, Portland, and Atlanta had more entertainment establishments than Tampa.

In terms of “laziness” the area came in 43rd place because so many adults don’t exercise, work much, or do volunteer work. There’s also a lot of high school dropouts and people who spend most of their day watching TV.
When it comes to excesses and vices, the area is 50th on the list. This is because there’s a lot of obese adults here who seemingly feast at the large number fast food establishments there. They drink (alcohol and coffee) and smoke excessively (tobacco and weed). Lots of retail opioid prescriptions are written, resulting in many drug overdose deaths.

Three other areas Tampa ranked high in include:

Just because Tampa is considered “sin city” doesn’t mean your business has to commit the ultimate SEO sin. The Local SEO Company is here to help in that regard at least. Contact them today to help get your site where it needs to be in the SERPs and stop sinning!