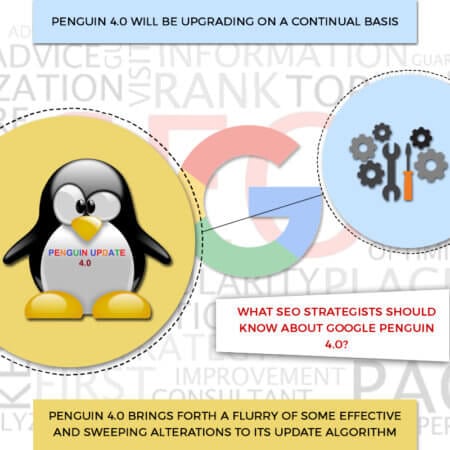 When it comes to introducing key updates with regards to SERP algorithms, Google- the most admired and popular search engine has behaved like the proverbial slow and steady tortoise. Though, the search engine in the last few years has led to some modifications and adjustments that have kept smartphone users in good humor, these updates were by no means across-the-board. However, Google has not offered SEO strategists good reasons to cheer about as the search engine hasn’t updated Penguin or Panda of late. Nevertheless, after lying low for a period that seemed like an eternity, Google has made public their most- recent release which the SEO stakeholders have coined as Penguin 4.0.

If you have a business that has a web-based interface or platform and the SERP ranking of your online store influences your dealings considerably or you’re an SEO campaigner, then you need to keep yourself in the loop about Penguin 4.0. For the record, Penguin was Google’s strategic updating algorithm that was introduced in the year 2012. Panda update was launched just a year earlier that marked a watershed in the manner in which the search engine ranked sites on the basis of ‘quality of content’-sites with poor or low-quality content were penalized while portals with relevant and informative content were rewarded. Penguin profiled portals based on the worthiness of the inbound links connecting to the same.

Penguin 4.0 brings forth a flurry of some effective and sweeping alterations to its update algorithm that’ll be to the liking of the SEO strategists. Let’s analyze what these modifications are:-

1. The updates are consistent and gradual

Penguin 4.0 will be upgrading on a continual basis which means you won’t have to wait anxiously for months to see your site’s ranking every few weeks or so. Regardless of whether you implement any change(s) in your SEO campaign (in order to have a higher SERP rank), you’ll be able to know your site’s current ranking more frequently. The downside of this consistent updating will be that your site will be downgraded in no time in case you attempt to buy spammy or questionable links in the hope of gaining a better rank.

2. Integrated with the essence of Google’s update algorithms

Google has claimed without mincing any words that it’s most current Penguin update is now thoroughly updated with all its other algorithms that comprise the core or heart. The top-notch search engine making such a claim sounds somewhat cumbersome as the essence or core is made up of innumerable distinct algorithms each of which plays a role in assessing the ‘modus operandi’ of ranking a site following a search with a particular ‘keyword’ or a ‘set of keywords’. Since Google is indisputably a behemoth with clear-cut, transparent policies, its claims imply that Penguin by being an integral part of that core group of algorithms will have a more significant role to play as far as according to rank to websites is concerned.

3. Penalty will be page-specific instead of being domain-centric

Hitherto, Google banked on spammers to penalize or downgrade the entire domain just on the basis of a single inbound link stationed on a site with dubious or questionable reputation. However, with Penguin 4.0, it is only the particular page having spam inbound link that gets the boot instead of the URL.

Key Aspects of Penguin 4.0 that SEO Campaigners and Publicists Should Be Aware of

The newest Google Penguin update literally compels you to re-evaluate and introspect on your inbound link-building techniques. You’ll also get to know and view the outcome of your link-building approaches almost instantly thereby enabling you to take remedial steps accordingly. It is expected that future updates from Google will be increasingly core-algorithm oriented which will imply that SEO drives will be more stable.