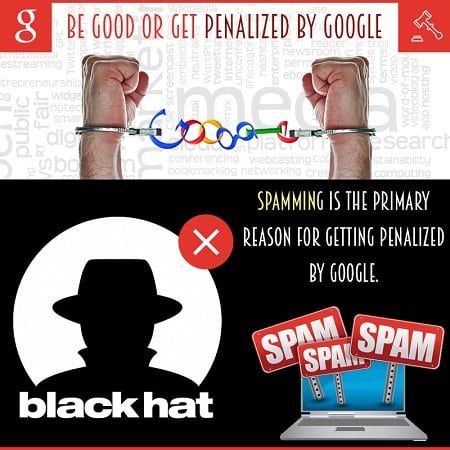 That rumbling sound you’ve heard often on the web is the result of websites falling off the rails and crashing to the ground. Why? It’s because they’ve been penalized by Google for being bad boys and girls and trying to take advantage of SEO and the search engines themselves. That being said, we need to look at what the reasons for being penalized by Google are.

First of all, don’t think you’re smarter than the staff at Google. They’ve got tons of money and the best engineers on the planet. They work diligently night and day to ensure the surfers get results that are pertinent and a value to their lives. Google doesn’t want people looking for a service or goods to find a website run by a bunch of crooks because once the surfer gets burned they’ll blame Google and go elsewhere for their searches and that means loss of revenue and power. Nobody wants that except maybe Google’s competitors. Google develops super intelligent software, a suite of software tools that they use that employ the top algorithms for searching anywhere. They look for any outpoints that a website may have and determine if the webmaster is incompetent or out to scam Google and thus the public.

There are armies of scoundrels throughout the world who do nothing all day than to try to outwit Google. Sometimes they do, but it’s only a matter of time before Google catches on and blows them out of the water. A Google penalty can be devastating and in some cases, there is no redemption. Known as Black Hat techniques, these people come up with some of the most devious means of trying to take advantage of the search engines that it rivals the mad scientists of the movie thrillers and comic books. As soon as they try one sinister technique, Google is on them and putting up the defenses and dishing out the penalties like those legendary lightning bolts of Zeus, head of the Greek gods.

Spamming is the primary reason for getting penalized by Google. The minute Google detects your site as some most of spammy techniques and technologies, you’re headed for doom. Google hates spam. So much so that they’ve developed specialized software to handle spam alone.

Devious linking is another reason to get a beatdown from Google. Inbound and outbound links that have nothing to do with your site but are there in order to make your site look important doesn’t work anymore and will get a big foot from Google. Not only is this criminal to Google, but if you use software to do it, you’re in for an even more ruthless beatdown from Google.

Keyword stuffing will definitely get you penalized by Google. Putting your keywords in every sentence, in every pic, video, the graphic will signal to Google that you’re trying to get over on them. This is one of the fastest ways to get the boot from Google. So much so that if Google busts your for keyword stuffing, you may never rise again. You won’t even be able to sell your domain. It’s not worth it, so place your keywords fluidly and naturally and save yourself a world of misery.

What will really get you created by Google is the use of software to mislead surfers such as masking links or cloaking them, redirecting to unrelated data, pop-ups that capture a page not allowing a surfer to leave, and more. There are tons of deceptive software out there and Google has software to detect them. Google is so good nowadays that often, as soon as a piece of sinister software hits the scene, Google has a countermeasure ready and operating within hours or a few days.

The bottom line here is that search engine results should be honorable and effective. Yes, Google charges for top placement and many find that justification to use whatever they can to beat the odds. Using someone else’s content page for page, alternate URLs, impersonation of a popular person in an industry, all forms of deception and chicanery are in the sights of Google and it’s only a matter of time before Google puts that bullet smack dab in the bulls-eye of a crooked website.