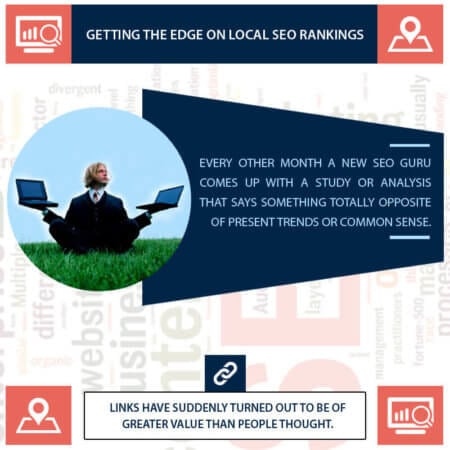 Keeping up on the latest analytical data regarding which factors are actually working regarding Local SEO is paramount to surviving in the SEO game.

In the past things meandered from one end of the spectrum to the other. Some people focused on keywords until keywords fluctuated and panic ensued and entire game plans were upended. Then when analysis later showed keywords to be a stronger factor, people went right back to the keyword game. The same went for links. In the old days people piled on as many links as possible to the point of overwhelm. Then Google started penalizing links and they dropped off, but then links showed strength and again, they went right back to link building using all sorts of strategies. Some made sense and others were ludicrous. Every other month a new SEO guru comes up with a study or analysis that says something totally opposite of present trends or common sense.

This often happens for three primary reasons, an expert finds a new piece of valuable data, a marketer wants to make money selling SEO courses so they exaggerate claims, or an unscrupulous type who is trying to derail people off the right path. Links have suddenly turned out to be of greater value than people thought. That’s what some recent analytical data professes but then again, common sense should take the strong foothold here.

Links are important. Once they were thought to be dead and would get you penalized. This caused lots of people to shuck off links but the smartest kept their inbound authority links. This then led to better Local SEO rankings especially with the business sites and related sites.

Social media comes into play here too. Those organic inbound links that aren’t static but are parts of ongoing threads and multiple topic posts, all flow inbound traffic and tell Google that your site isn’t some static, dead, spam site, but something that is alive and kicking and of constant interest and value to the public at hand. Just having a site that is SEO’d to within an inch of its life isn’t enough nowadays. The search engines are wise to people and companies that try to beat the system and this is why the SEs are looking at all metrics and especially that of organic activity primarily from the social media sites and the micro social media venues. What’s a micro social media venue? Well, what many people didn’t take into account was that websites would be using tools much like the social media sites do. With ‘shares’, and ‘likes’, and so on. These are now turning into micro social media sites with a contained and growing membership that is 100% organic and targeted.

People like to belong to a group, a gang, a family. If your business’ site is engaging and entertaining enough to bring people back, to join and converse, even if it’s only about specialized tools, or brand named products. Tools allowing for migrating one’s social media friends into one’s micro social site makes it easier to build an audience, even if only a dozen or so people chat or take activity per month. Your signature will be on all your social media posts and profiles so whenever anyone engages with you or shares or quotes you, those links will be an extra boost and a visible invitation.

So it’s good to keep on top of what the SEO industry is saying works, but it’s a good idea to just stick to the fundamentals as they do waver in popularity but for some reason they still bounce back.